This is your chance to

submit your own views as an individual or on behalf of an organisation to help to steer the direction of the future of Abbots Pool.

Abbots Pool is owned and managed by North Somerset Council (NSC), with support from the Parish Council, the local Abbots Pool Management Committee and the local volunteer group.  These groups have been trying to promote behaviour at the Pool in keeping with its status as a local Nature Reserve and to protect the area for the good of the wildlife and the enjoyment of visitors.  There is a code of conduct (see poster below), but unfortunately it is widely ignored.

There has been an increasing problem over the last couple of years as Abbots Pool has become a wild swimming and party destination.  This has a detrimental effect on local wildlife and enjoyment of the space by visitors to the Nature Reserve.  The covid restrictions saw an exponential rise in bad behaviour with partying becoming common and hundreds congregating on the dam, despite social distancing requirements.  The code of conduct signs were used as hangers for wet swimming gear.  There are no toilet facilities and the site became a public health hazard.

The closure and fencing of the pool area reduced numbers, but a significant contingent with little respect for authority were determined to break in, including causing criminal damage by pulling the fences down.  There is currently no way to enforce the code and without a PSPO the problems are likely to recur in 2021.T

The Management Committee has asked NSC to consider the introduction of a PSPO, which is a legal process under the Anti-Social Behaviour, Crime and Policing Act 2014.  This would allow enforcement notices with a fine of up to £75 to be issued by local council enforcement officers and police to those in breach of the order.

NSC has already drafted proposed orders which will apply across all North Somerset Land.  These orders cover:

NSC have now proposed a draft PSPO for Abbots Pool which just includes:

‘No person shall swim, bath, wade or jump into the water.’ This wouldn’t even cover the use of inflatables and boats.

The Parish Council has already submitted its view on this:

The proposed measures do not go far enough to be able to have effective enforcement to discourage the antisocial behaviour which is becoming all too frequent, meaning that people seeking to enjoy that area for its principal purpose now avoid it.  In the Area Wide proposed order ‘Failure to stop taking or surrender’ a psychoactive substance in schedule 2 or alcohol in schedule 3 is too weak to discourage people from carrying out the antisocial behaviour in the first place and perhaps summary fines should be applicable for any breach of the PSPO.

In the proposed local order for Abbots Pool order, we believe that for the order to be effective the it should be in line with the current code of conduct (see below) to include No Fires, No BBQs, No Camping and No Cycling except on the Bridleway to remain consistent with the existing agreed code of conduct for Abbots Pool Local Nature Reserve.  Also the proposal to just exclude people from entering the water needs to be extended to ‘No person shall be in or on the water’ thus including use of boats or inflatables.  This is necessary in order to counter the argument that a person using a boat/inflatable has not entered the water and therefore has not breached t the proposed order.

Clearly for the PSPO to be effective it will also have to be prominently advertised at the site and be regularly enforced.

Make sure you visit the Public Consultation on the NSC website before Sunday 3rd January 2021. 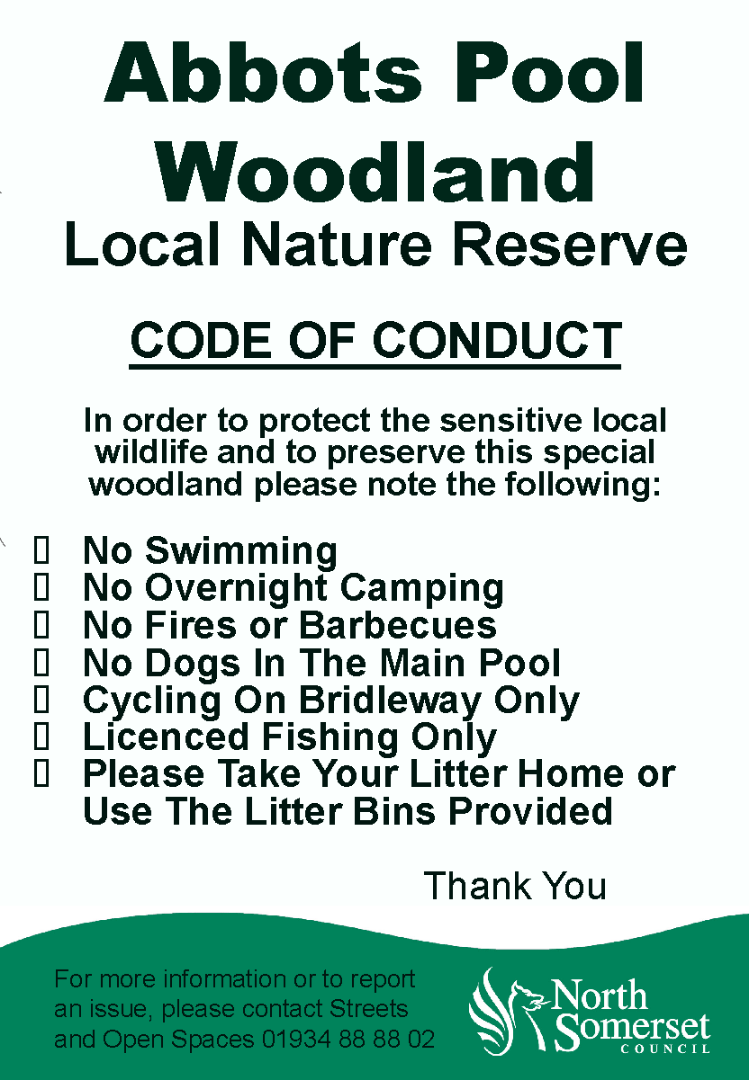