In the 1920s there was continued recognition by wealthy Bristol families of the appeal of Abbots Leigh as a residential location.  Commander Charles Willes bought twenty acres of the new Deer Park.  On Church Road Ernest Taylor (Taylors of Clifton, Drapers) built Campfield in 1921, Ernest Savory built Windyridge, whilst the Inskips bought, and built cottages in the grounds at The Chantry. 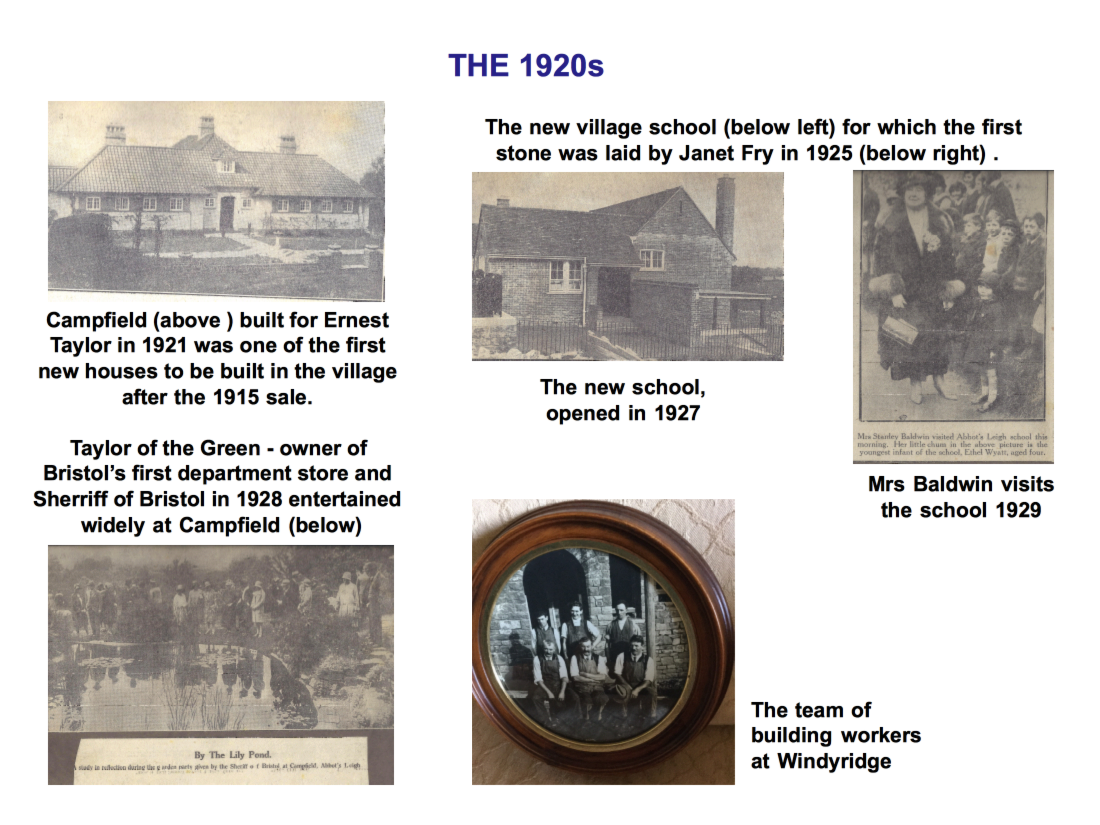 Through the 1920s Melville Wills continued to extend his holdings in Abbots Leigh.  After his 1918 purchase of Home Farm from the ailing Edwin Alvis, there came the construction of Ashgrove Avenue with materials from the remains of the Bristol White City.  In 1927 he bought much of Leigh Woods from Donald Kennedy, and in 1928 purchased land next to Home Farm from the executors of Thomas Weeks’ estate.   In 1929 he bought the Tanpits.

From Blackmoor Road up to Ham Green land changed hands several times and by the mid 1920s the Thomas brothers had acquired several acres.  Richard Beard Withers reconstructed half a dozen former army camp bungalows and reconstructed them along Blackmoor Road.

Chapel Pill Farm was linked to Ham Green Hospital as the ‘hospital farm’ and passed in 1923 into the joint ownership of the Ministry of Health and Bristol Corporation.

A new school was opened in 1927.  In 1929 Stanley Baldwin, visiting the Chantry, met a number of school children (see below).

The 1915 sale and the disappearance of the Miles form Leigh Court shifted the basis of power in the village.  In the 1920s Colonel Batten, at Leigh Lodge until he left in 1924, Inghram Gunn at Abbots Leigh House, the Frys at The Priory, the Inskips at The Chantry led a social structure where social relations and community activity were dominated by a few rich families. James Arrowsmith Brown and Ernest Taylor were successive High Sheriffs of Bristol in 1927 and 1928.