At the end of Church Road in Abbots Leigh, a gateway leads into a private lane. The gates are pushed open, so it’s not surprising that from the road you can’t see what’s hidden there. But walking just past the gate posts, wrought iron gates on either side mark the entrance to South Down Park. It takes more than a cursory look to see that these double gates incorporate, not a repeating pattern often used for wrought-iron work, but ninety distinct emblems. 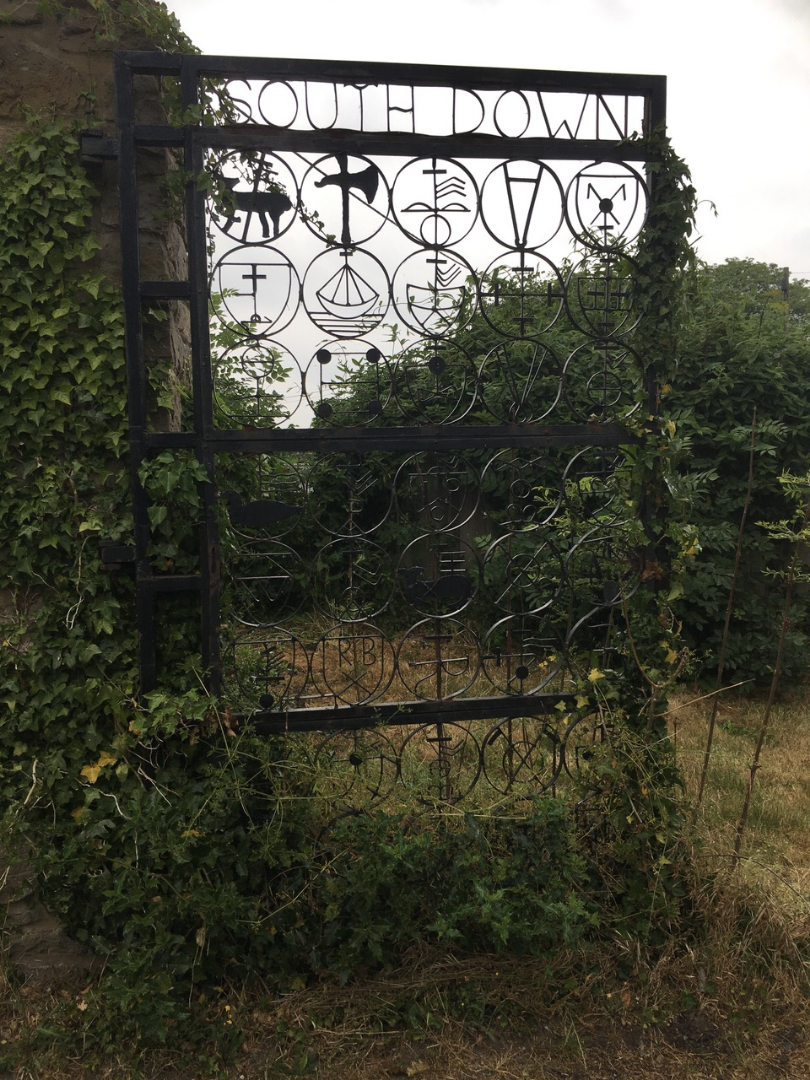 First conjectures were that the gates came from an old Bristol building, perhaps even the Old Guild Hall. During World War II, they might have been requisitioned but proving to be unusable, ended up in a scrap yard. Simon Talbot-Ponsonby identified the man who installed those gates in about 1980 as Mr. Terry Bryant, who acquired the property at South Down Park. Perhaps he retrieved the panels to incorporate them into gates. Mr. Bryant, a house builder with a particular interest in Bristol memorabilia, may have recognised what these panels represented. 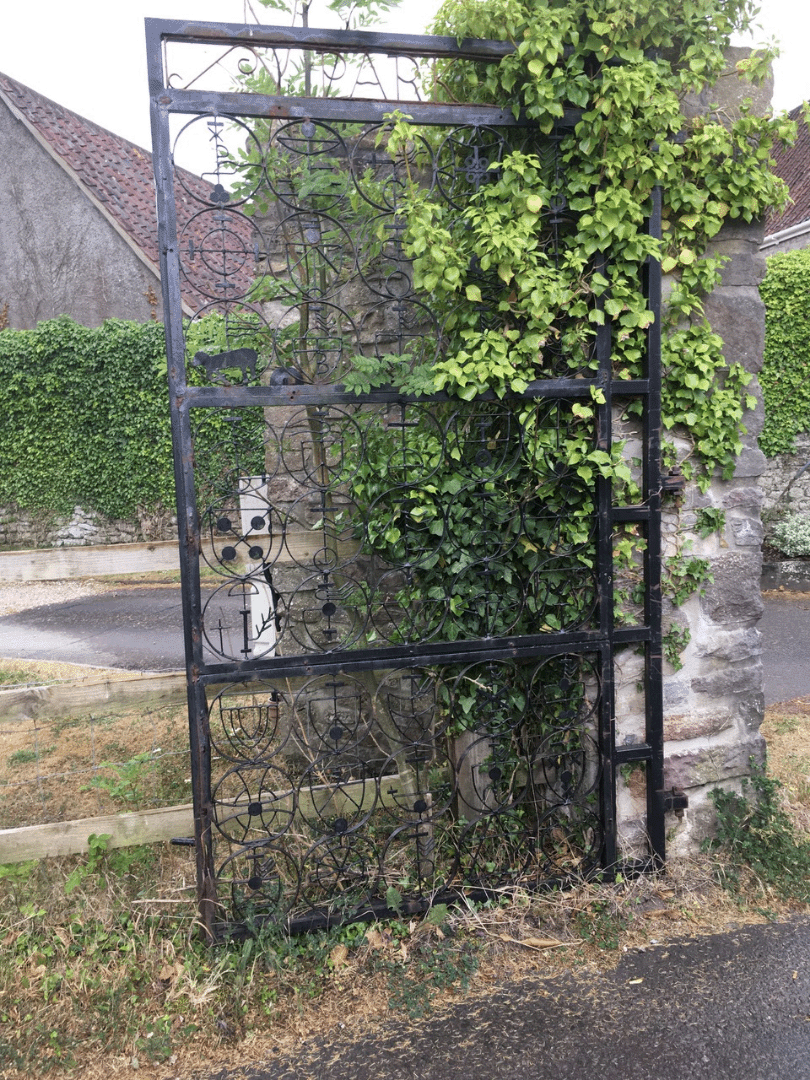 Each of the two South Down Park gates comprise three panels of fifteen marks, with each set of fifteen corresponding exactly with Mr. Hudd’s marks no. 34 to 123. They begin on the top of the left gate with the seal of Agnes le Chamberlain from a deed to property in Henbury Parish dated 1326 and conclude at the bottom of the right gate with a deed dated August 11th, 1362, with Philip le Long, burgess of Bristol, and Thomas Denebawe granting to Adam Pountfreit a house and land called “le Erbe” in “Seynt Colastret,” which was in the area between St. Nicholas’ Gate and St. Leonard’s Gate. The entire key can be downloaded here.

The emblems on the gates are clearly based on Mr. Hudd’s original research and the drawings that accompanied his article, so the panels can date from no earlier than 1911. Furthermore, Andy Theale of Iron Art of Bath, which restores heritage wrought and cast iron, looked at photos of the South Down Park gates and identified them as “thoroughly modern.”  They are the product of electric welding, which was not used until after World War I but doesn’t seem to have come into widespread use until the middle of the twentieth century.

Unless someone recognises these gates from an earlier site, it is most likely that Mr. Bryant, with his interest in Bristol history, designed the gates based on Mr. Hudd’s article and had them especially made for South Down Park. 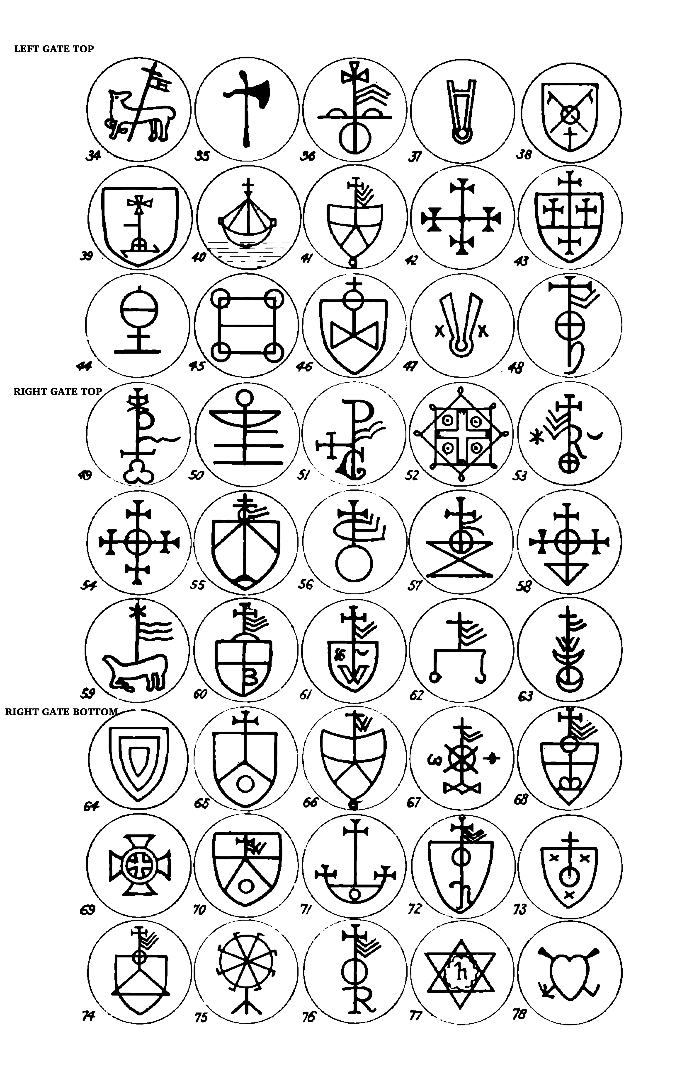 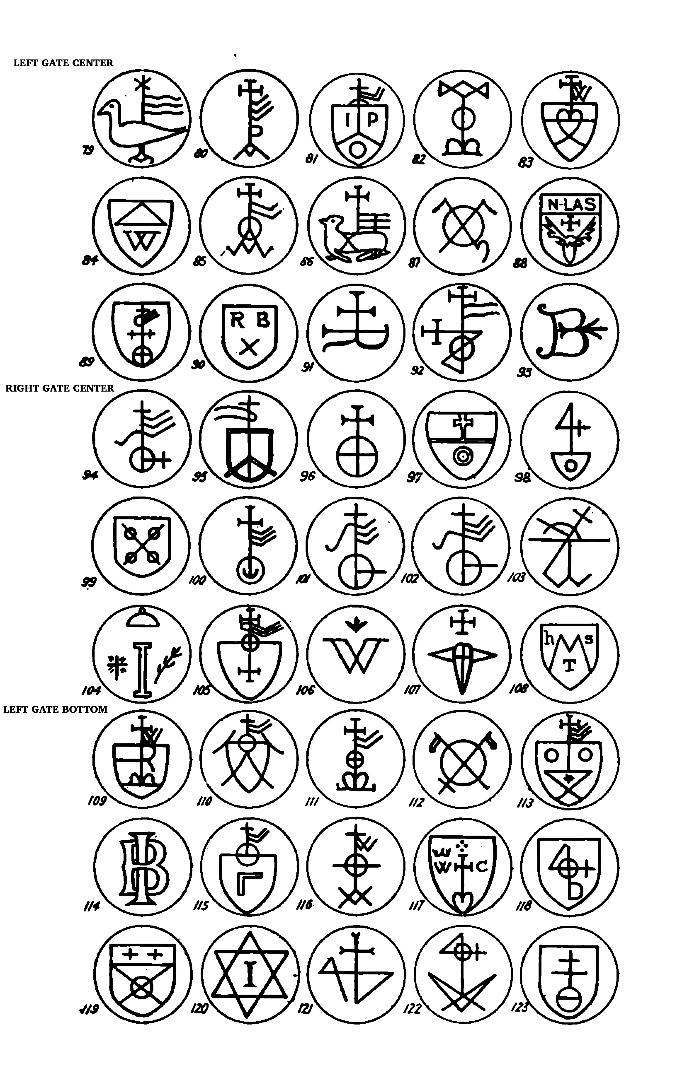 These appear to me to be post-WWII, wanting somewhat in good detailing, but of interesting design. The mason's marks are clearly a reconstruction of Alfred Hudd's early C20 article in the Proceedings of the Clifton Archaeological  Club.  Notice of Terry Bryant's name as owner of South Down Park (rather than Southdown Park) was sufficient for me to ascribe the choice of the merchant's emblems to Terry's own interest in Bristol History.  I first came across Terry's name through his connection with my father, Reece Winstone, and later I visited Terry at his subsequent home in Ravenshill Road, Knowle. He was interested in Bristol makers of optical instruments and was collecting information for a monograph.  We had a C19 trade card of a Bristol instrument maker and were about to publish it in Bristol Trade Cards (1993 - volume 39 of a series), where TB's help is acknowledged.

Terry was the eldest son of a family of Bristol speculative house-builders.  He had a falling out with his fellow directors; I believe over adverse publicity springing from his views of the City Council's port expansion.  If this resulted in a set back for Terry, he bore it well.  He had managed to build a personal collection of Bristol books and manuscripts which he marked with a roundel 'Terence Bryant Collection' by rubber stamp in green ink.

I cannot tell from the photographs to what extent Terry may have worked on the stone gate piers. As to the conservation of the gates, they are certainly worthy of designation as a locally listed asset, provided they remain in situ in their designed location, and should be put in good repair.