Whilst there was some development in the 1920s with property holdings changing hands and some new building, none of the speculative purchasers of land at the 1915 auction moved on to initiate development on the land they had bought. It was not until the 1930s that significant new development brought change on the estate.

There were two reasons for this. One was that the war and a depressed property market discouraged immediate development, but perhaps more importantly Melville Wills both acquired new land holdings across the Abbots Leigh estate and denied the opportunity for these holdings  to be developed.

Wills may in 1915 have wanted to acquire good hunting and shooting land (the estate boasted an average season of 1,500 pheasants and 1,800 to 2,000 rabbits),but he may also been seeking to find an appropriate home for his widowed cousin Yda Richardson to whom in 1918 he conveyed the Manor House, or he may have been seeking to protect Abbots Leigh from an expanding post-war Bristol.  He had already safeguarded much of Leigh Woods through sales to the National Trust and the Forestry Commission.  Whatever Melville Wills’ motivation, he ensured that much of Abbots Leigh was sealed off from development until after his death in 1941. 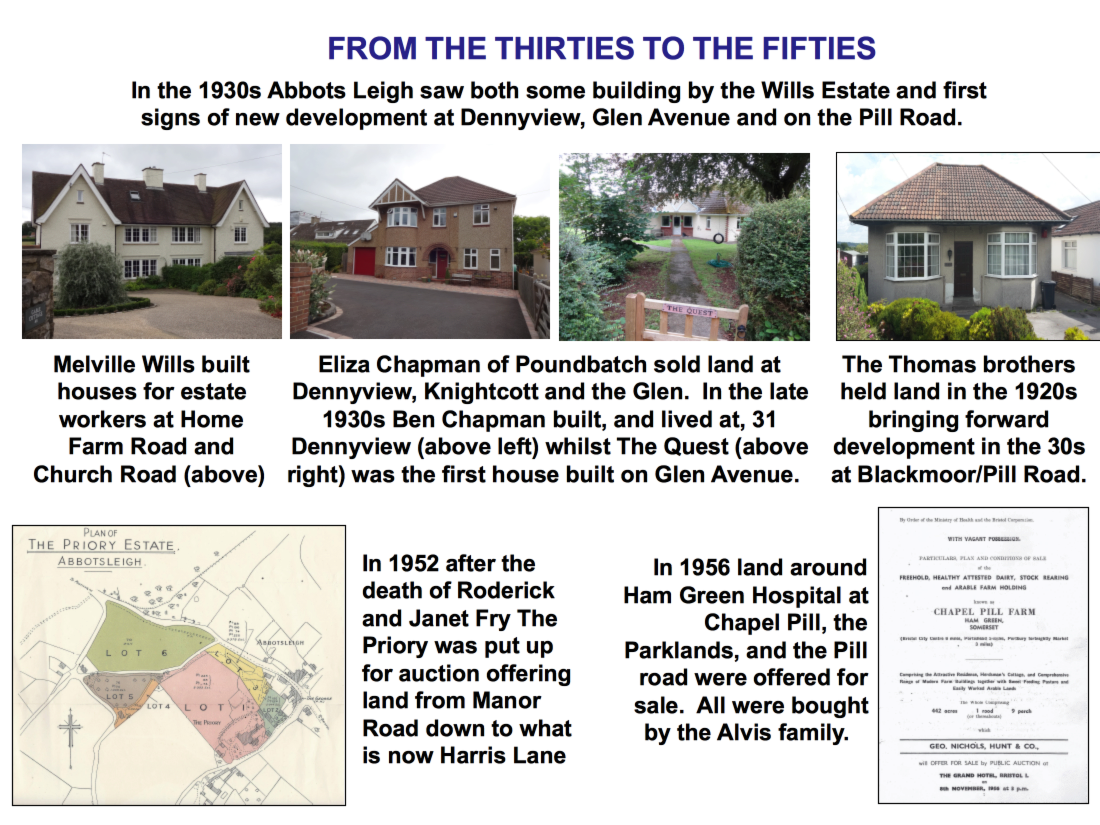 Through the 1920s and 1930s there had been some new housing at Ashgrove Avenue and Blackmoor, a few larger houses at the end of Church Road, a scattering of other dwellings on Wills land and the start of developments on Dennyview and Knightcott, but it was only in the early 1950s that Douglas Wills began a programme of sales.

This coincided with the sale of The Priory after the death of Janet Fry in 1952 and with the emergence of William (Billy) Bray, the first genuine developer/builder to exploit Abbots Leigh.   Elsewhere there was some development on the Pill Road and new building on the kitchen-garden land of Abbots Leigh House, whilst Eliza and later Ben Chapman further exploited the potential of Dennyview, Knightcott and the Glen.

Other land, at Ham Green, around Chapel Pill (still seen today as having unexploited development potential), at Upper Farm, at Old Park and at Tanpits and Fishponds remained, and remains, largely undeveloped.