Next to the George Inn was the Post Office and Shop run by Arthur Giddings.  In 1895 the Old Post Office was still in Church Road, having been run by Mary Dust for many years from before 1851 until the 1880s, and by Mary Babbage in 1901.  Soon after the Miles built a pair of cottages on the main Bristol road, Arthur Giddings then the village postman boarding with Wm. Bennett at Fishponds Cottage, took over one of the cottages and ran it as shop and post-office.

Next door was the Police House. Stanley Lloyd was the village policeman until after the war. Later he retired, bought land from the Wills Estate on Manor Lane and built his own house, Stanlea. Did Stanley name Stanlea after himself?

On the other side of the main road was the Village Hall, paid for by Sir Cecil Miles, designed by Edward Down of Leigh Bank, built in 1896 and looked after by a series of caretakers.  At the 1915 sale of the estate Edwin Frampton was tenant and village hall caretaker. Son of Sarah Frampton who had in the 1890s been sub-postmistress, Edwin bought one of the cottages along Church Road. Both Edwin and his older brother William enlisted for the war and on their safe return became stalwarts of village life.  Both played for the village cricket team, Edwin became a parish councillor whilst William was Parish Clerk for a number of years.  The Village Hall had been bought in 1915 by Colonel Batten for £190 but was later sold to Yda Richardson. She in turn donated the hall to the village in 1927.

On a four acre stretch of land fronting the main road to Bristol - at this time known as ‘Farm Hill’ – was a Quarry – let to Long Ashton District Council for a rent of 4d per cubic yard. The quarry and surrounding land was auctioned in 1918 and bought by Melville Wills. 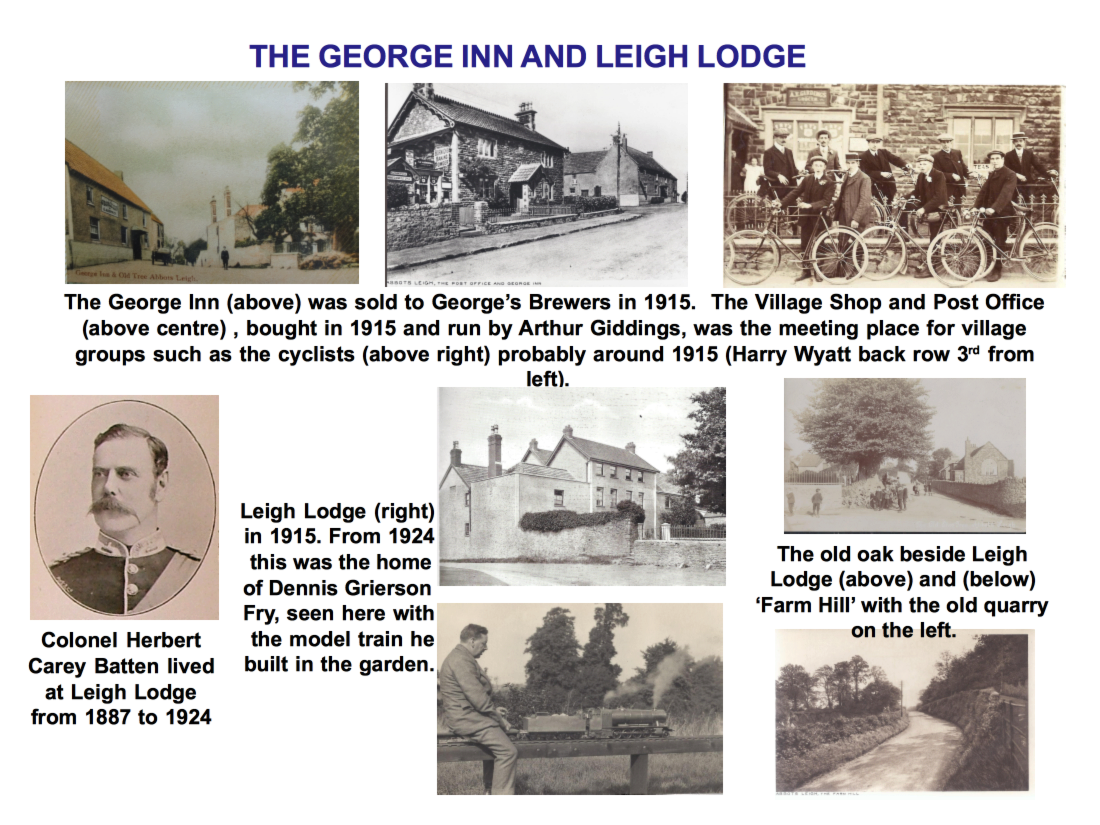 Leigh Lodge is marked on Richardson’s 1800 map and is one of the oldest buildings in the village. Occupied in 1841 (the first Census) by Francis Short, a lawyer, it had by 1861 become the home of James Fussell, another lawyer.  He died in 1880 and in 1884 Colonel Herbert Carey Batten became the tenant.

Batten was to remain at Leigh Lodge until 1924 and was an influential figure over these forty years.  Batten was Chairman of the first Abbots Leigh Parish Council (1894). In 1915 he bought a number of properties at the estate auction – Leigh Lodge itself, several cottages, the Deer Park, and the Village Hall. His first wife Frances died in 1893 (buried in the churchyard) and in 1924 he returned to his birthplace in Devon.His Abbots Leigh properties were sold and Leigh Lodge became the home of Dennis Grierson Fry and his wife Norah.

There was one child Elizabeth Ann, but Dennis Fry died young aged 37 in 1933. Elizabeth was the last survivor of the Fry family in Abbots Leigh - very much a recluse until her marriage to Patrick Joseph Lee. He was widely thought to be her gardener, a rumour she vigorously denied.  They later moved to a flat in Knightsbridge in London and when she died she left a considerable fortune (in the millions) to Joseph in his lifetime and then to the National Trust to buy properties on the Cornish coast.  When Joseph died he also left a considerable sum including £100,000 to the Fry Millennium Trust to look after the churchyard here in Abbots Leigh. Both Elizabeth Ann and Joseph are buried in the Lower Churchyard at Abbots Leigh.

In 1964 Leigh Lodge had been sold to Lady Cadbury after the death of Sir Egbert but she only lived there a few weeks and since then the Lodge has passed through a number of owners.