The Miles family’s wealth was first created by William Miles (1728-1803) who moved to Bristol from Herefordshire in his teens and became engaged in the sugar industry. He managed a sugar plantation in Jamaica and was later a sugar merchant at home in Bristol. He owned a refinery, the Sugar House (now Hotel du Vin in Lewin’s Mead), and further developed his business interests in shipping in the West India Trade. 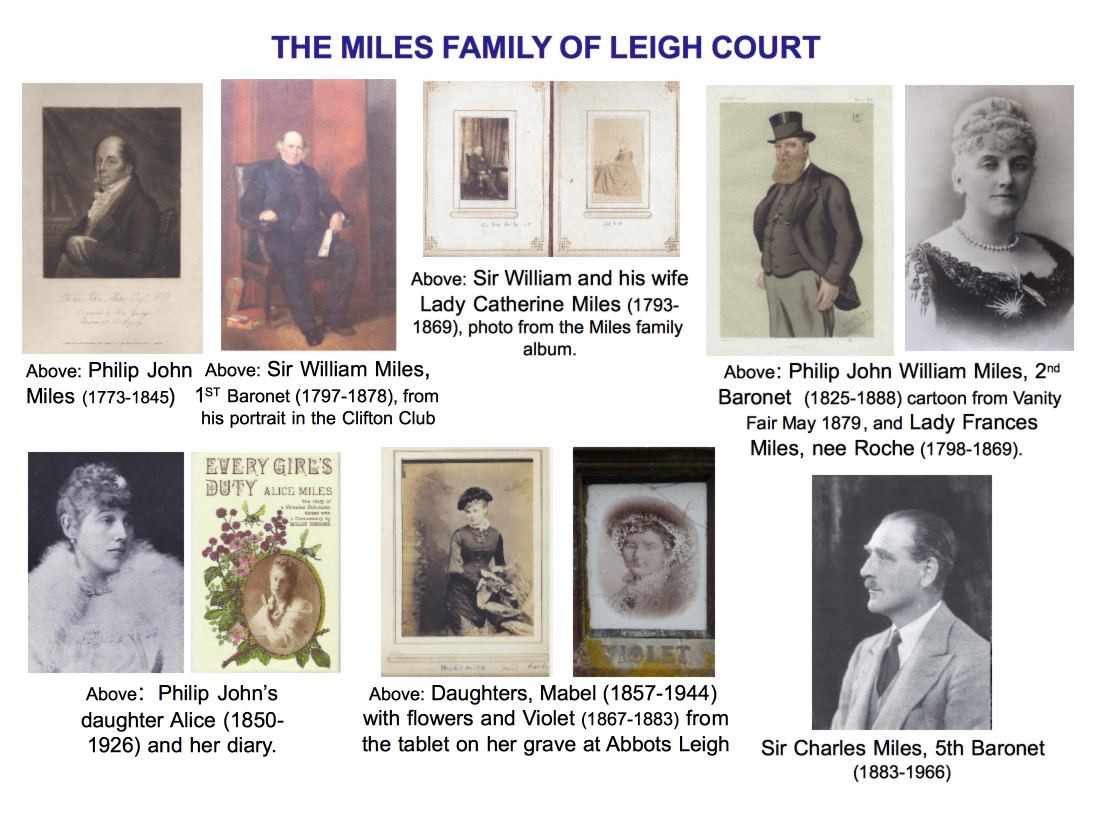 On William’s death in 1803 his only surviving son the thirty year old Philip John Miles (1773-1845) inherited the family wealth, and diversified into banking as well as sugar and shipping. In 1811 he bought the Abbots Leigh Estate, but in the same year his first wife Maria died, and Miles delayed commissioning the new mansion of Leigh Court until 1814. Miles remarried in 1813 – to the wealthy Camilla Peach by whom he had eleven more children - and during the three years of construction he lived at Naish House in Portishead. In 1832, helped by compensation for the loss of 2,200 slaves following abolition, he bought King’s Weston House in Bristol and used it as his main residence

Philip John Miles was succeeded in 1845 by his son William, created 1st Baronet in 1859, who presided over thirty years of ‘benevolent stewardship’ of the estate – paying to rebuild Holy Trinity Church after a fire in 1848, offering bibles to children who had done well at Pill school, and arranging the supply of clean water to ‘The Spout’ at Pill at a time of cholera. William married Catherine Gordon in 1823 by whom he had twelve children.Several of William’s children maintained local connections. After the death of Richard Bright the Miles bought Ham Green House and in 1871 William Henry Miles (1830-1888), Sir William’s second son, was resident there at both 1871 and 1881 Censuses.

Also in 1871 The Manor House was occupied by the thirty nine year old Charles John William Miles (1832-1874) who had married Elizabeth Maria Lloyd daughter of a former tenant at the Manor House. Catherine, Sir William’s daughter (1834-1911) married Robert Onesiphorus Bright son of Robert Bright (1795-1869) of the Chantry, Abbots Leigh.Sir William’s eldest son, Philip John William (1825-1888) who had waited many years for his inheritance living in Paris and London succeeded as 2nd baronet in 1878. He was an irregular resident at Abbots Leigh but was well known in London social circles (he is on the front cover of the May 1979 Vanity Fair). He married renowned society beauty Frances Roche. Of their four children only the two youngest – Violet and Cecil – were resident at Abbots Leigh in 1881. An elder sister, Victorian debutante Alice, kept a tasty diary Every Girl’s Duty (which was to marry £80,000 a year),but it was Cecil(1873-1898) who in 1888 succeeded to the baronetcy at the age of fifteen.

Cecil is crucial to the Miles family history since in 1896 he died without leaving an heir. It is his 1895 will, however, which set out the terms upon which subsequent title to the estate was established and which formed the legal basis for the property rights upon which estate properties were sold after 1915.Cecil was born and died in London but his association with the village was close. He was president, and played from time to time, for the village cricket team. He provided funds for the new Village Hall built in 1889. In 1892 at a concert in the village schoolroom ‘songs were capitally rendered by Mr. H. R. Miles and Sir Cecil Miles’.

In 1894 a Parish Council was established and Sir Cecil and Sir Henry miles were elected members.In Cecil’s own words (at his 21st birthday party) he foresaw ‘a short life but a merry one’ and this proved to be the case. In 1895 he married a Cheltenham parlour maid, described as ‘the disreputable Minnie Spire’, honeymooned to Guernsey on his 128 foot, 28 crew steam yacht ‘Lufra’ which was harboured from time to time at Portishead, and by the time of his death is reported to have squandered £195,000 of the family money.Cecil was succeeded as 4th Baron by his uncle Henry Robert William Miles (1943-1915), youngest son of the former Sir William Miles.

Although Henry Robert was resident at Leigh Court in 1911 the Miles Family presence in Abbots Leigh had declined over the last years of the nineteenth century and, despite the construction of the Portishead Railway and the opening of the Clifton Suspension Bridge, the estate began to experience ‘genteel decline’. Death duties and the ever growing costs of maintenance made the sale of the estate in 1915 inevitable.Charles William Miles, 5th baronet, at the time serving in India, decided to sell the Estate. Charles Miles died in 1966 and was succeeded first by his son William Napier Maurice Miles (1913-2010) and later by the 7th Baronet Philip John Miles. The Miles family continue to hold property on the Walton in Gordano estate..