Cottages have long been the dominant form of dwelling in Abbots Leigh. In 1800 seventeen out of thirty village dwellings were cottages, whilst at the 1915 sale forty three out of the sixty four dwellings offered in the catalogue were cottages or cottage style dwellings.

Within these totals there are varying definitions of cottage.  Some had an upper floor, some were described as villas; some were attached to a larger house (e.g. as a gardener’s cottage); some were lodges.  Many were built in pairs – in the 1915 sale fifteen of the Lots consisted of ‘a pair of cottages’.

The oldest cottages lay in two clusters.  One cluster was along Church Road, including Old Stone Cottages and what was to become Swallowfield and also took in other cottages on what was then a village path down to the Old Court House.  The second cluster lay around the Old Park, west of the Pill Road taking in dwellings in ‘The Glen’ – Myrtle Cottage, Burnt House, Old Park Cottage, Fishponds Cottages, Fishponds Bottom Cottages (now Glen Cottages) and Tanpits. 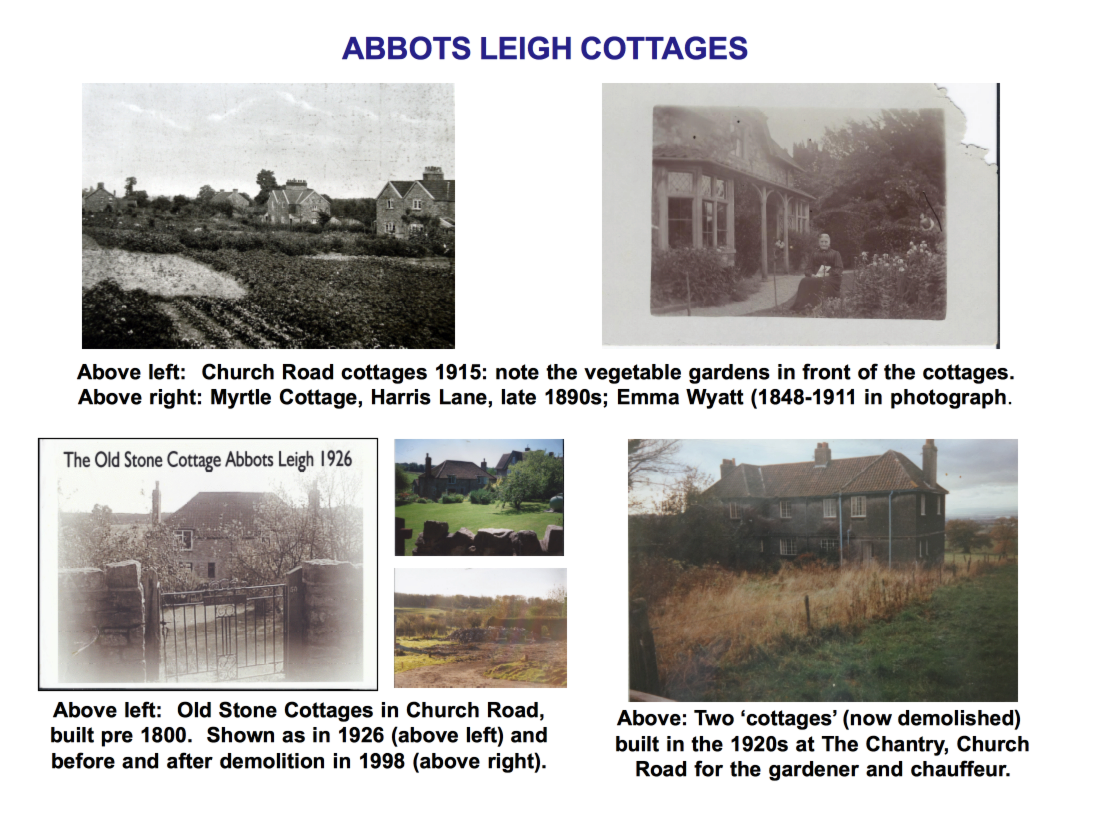 At the same time as Leigh Court Mansion was built five lodges were established at Oak Wood, Blackmoor, the Upper Gateway (two dwellings) and the Pill Road. In the 1830s the Slate Cottages in Manor Lane were built as were several pairs of cottages on Church Road. Towards the end of the nineteenth century the Miles built further cottages on Church Road, on Fishponds Lane (the Cinder Track), and on the Bristol Road – the post office and police house villas. There were also cottages set within the grounds of The Priory and Leigh Bank, attached to some of the farms, and a single cottage at the end of Weir Lane.

There was little cottage building after the 1915 sale. Eight cottages were built by Ham Green Hospital on Chapel Pill Lane, two at The Chantry for chauffeur and gardener, and one at Knightcott market garden.  Historically tenants were typically gardeners, domestic servants, farm workers, laundresses, or engaged in jobs relating to the estate or the major houses - cook, groom, butler, gamekeeper, chauffeur, coachman). Many of the cottage tenants (ten in 1911) had boarders.